With the current environmental crisis occurring on our planet, and the large amount of data we have to aid us in understanding the degree of the phenomenon, it is important now more than ever to utilize our knowledge to protect these ecosystems. Earth has a diverse array of natural habitats including Coral Reefs. It has been reported by the Global Reef Monitoring Network (GCRMN) that about 19% of the Earth’s coral reefs are now dead, with multiple factors to blame including rising sea temperatures and ocean acidification. 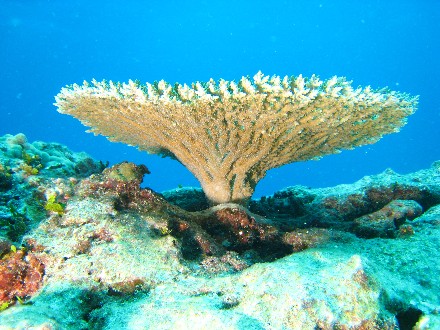 Coral reef ecosystems and the accompanying organisms that depend upon them are in danger of disappearing if we do not take action to protect these reefs. Coral reefs make up only 0.2% of our oceans, but they are home to over 25% of all marine fish species. The United Nations predicts that the Earth is on the brink of a massive extinction event, with some studies even suggesting 25% of the planet’s species will be extinct by 2050. If we do not stop the effects of these factors we may lose a whole lot more than just the corals. The rapid decline of coral reefs will result in a significant number of social, economic and environmental tragedies around the world. We as humans must intervene knowing this current situation. In the US, the decline and danger from the loss of corals started to gain attention by the government in 1998. Since then, many reef protection organizations have emerged varying from government-funded to non-profits.

The USCRTF was established in 1998 by Bill Clinton who was President of the United States at that time. It’s mission is aimed to protect and conserve coral reefs.

The USCRTF accomplishes this mission by mapping and monitoring the U.S. coral reefs, as well as helping to identify the problems causing the decline in reefs. Their goals as a task force is to find solutions to these problems, and to promote conservation and the sustainable use of coral reefs to the public. By working together with other organizations they try to find the best possible strategies to save the reefs. The USCRTF is responsible for many tasks which include but are not limited to:

Similar to USCRTF there are many organizations out there trying to make a difference by saving coral reefs and the ecological communities that surround them. Below are four well known organizations trying similar tactics by identifying the problems and finding solutions for coral reef ecosystem protection.

One organization working to protect our coral reefs is the Coral Reef Alliance (CORAL). They work with people from very different backgrounds: politicians, scientists, divers, and even fisherman. Their holistic conservation programs can be seen around the world, anywhere from Hawaii to Indonesia. After seeing the success of their programs many other communities and organizations have emulated their programs and efforts. Some of their work consists of creating healthy fisheries for reefs, assisting in ensuring clean water for reefs, protecting intact reef ecosystems, improving knowledge of the science of adaptation, among other things.

If you are interested in helping the Coral Reef Alliance there are many things that you can do. CORAL suggests a couple of things that can let you take action in your daily life such as traveling sustainably and working to educate others. If you want to take a more active role you can donate to their cause or even volunteer.

NOAA by Wikimedia Commons under [CC BY 2.0]

A second organization working to protect the worlds coral reefs is the NOAA’s Coral Reef Conservation Program. This organization was founded in the year 2000 by the Coral Reef Conservation Act and they have four main pillars of work: Increase resilience to climate change, reduce land-based sources of pollution, improve fisheries’ sustainability, and to restore viable coral populations. In order to preserve the Coral Reefs they are working with many scientists involved in many different facets of NOAA. They believe that collaboration is the key to coral reef conservation. They partner with governments, academic institutions, and community groups to help save the coral reef environments. If you are interested in getting involved with the NOAA’s coral reef conservation efforts there are a few ways you can do that. You can join the U.S. Coral Reef Task Force. If you are interested in heading your own efforts for Coral Reef conservation here is some information on how to get funded through the NOAA’s grant programs. The NOAA also has job opportunities- here is a link to follow if you’re interested. You can follow them on Twitter to see how they are getting the word out to the public.

Ocean Conservancy is another organization whose goal is to conserve every part of the ocean and marine life that surrounds it. This organization promotes health and diverse ocean ecosystems and aims to stop/limit the practices that threaten marine and human life. They focus on some of the main problems threatening  marine life such as ocean acidification, trash, and helping set up sustainable fisheries to prevent over-fishing and the harmful effects of tourism.

NFWF was created by Congress in 1984 and since then has become one of the world’s largest conservation organizations. They work with both public and private sectors to help protect and restore the nation’s fish, wildlife and habitats that surrounds them. They support conservation efforts in all 50 states and U.S. territories. NFWF has a primary focus on bringing together parties, getting results, and finding better solutions to help the future world. NFWF leads conservation financially with a funding budget up to $3.8 billion dollars.

Due to the major threats happening to coral reef ecosystems, NFWF has been responding to these problems by taking on multiple coral conservation initiatives in an aim to limit the threats, increase public awareness and find solutions to the problems of the decline of coral reefs both domestically and internationally.

To do this, NFWF works with many different partners to achieve these ideas for coral conservation. Some of these programs include programs that were discussed above such as managing the Coral Reef Programs with NOAA’s Coral Program and USDA-NRCS. NFWF specializes in bringing all parties together (i.e. individuals, government agencies, nonprofit organizations and corporations). This promotes a solid foundation to protect and restore species, promote healthy oceans, improve wildlife habitat, help with sustainable fisheries, and water conservation. To date, NFWF has supported projects for coral reef conservation totaling over $34 million in about 39 countries giving them a global outreach.

Reef Check International is an organization whose mission is to preserve the oceans and reefs emphasizing how critical they are to our survival. They work to not only protect tropical coral reefs but also California rocky reefs through education, research and conservation. Impressively, Reef Check has volunteer teams in more than 90 countries and territories.

The results of citizen science divers are used to improve the management of these critically important natural resources. Reef Check programs are notable for providing ecologically sound and economically sustainable solutions to save reefs, by creating partnerships among community volunteers, government agencies, businesses, universities and other nonprofits.

Dr. Karen Cangialosi of Keene State College is the Reef Check International Team Coordinator for the Turks and Caicos Islands. Read about her reef monitoring and youth education program here.

The information in this chapter in thanks to content contributions from Allie Tolles and Haley Zanga .